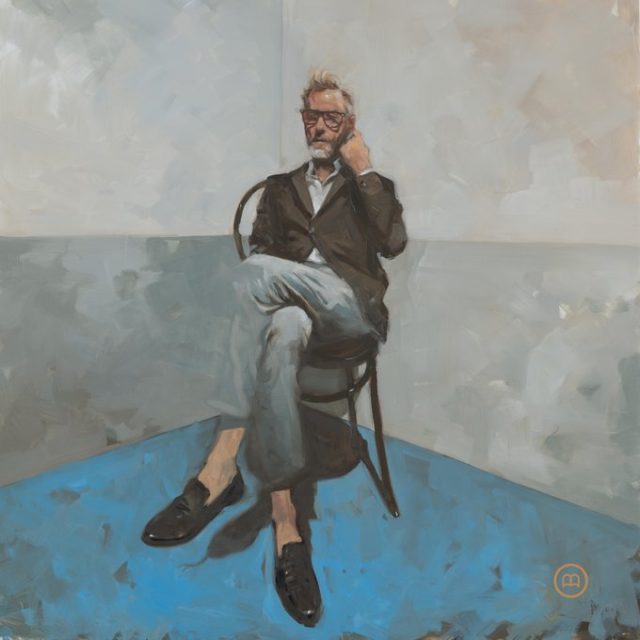 I remember exactly when I was radicalized.

As an indie rock fan from Ohio whose young adulthood overlapped with the National’s rise, the band has always been a favorite but never an obsession. I have fond memories of their show supporting Boxer in a shitty underground corporate venue known as The Basement, and of an arena gig opening for Arcade Fire in the wake of High Violet, and probably a half-dozen other concerts and festival sets over the years. Their electric 2010 run through “Afraid Of Everyone” on Letterman is one of my favorite late-night TV performances ever.

But not until I attended their Homecoming festival in 2018 did I become the kind of National Guy who swears their 2010s output stacks up favorably against their 2000s output, who defaults to Sleep Well Beast or the Cherry Tree EP when I’m not sure what else to listen to, who unashamedly embraces my role as a Thirtysomething Dad Who Loves The National and is honestly looking forward to my future as a Fortysomething Dad Who Loves The National. Maybe I had finally aged to the point of getting it on some deeper level, or maybe it was just the nostalgic weight of all those years. But something changed inside me that weekend, watching a lit-up Matt Berninger lead the band through two nights of raw yet sophisticated rock ‘n roll, illuminating old favorites and reminding me of so many classics I’d forgotten along the way. It was like belatedly realizing you’re in love with your best friend. I went all-in.

So you can trust me when I tell you Berninger’s first official solo album is just OK. This is not coming from somebody who slags the National off as boring or swears they peaked a decade ago or thinks all their songs sound the same; I guffaw at those people. It’s coming from a man who put in quite a few hours with 2019’s noble experiment I Am Easy To Find in search of a fleeting connection, who can’t decide whether he’s more enchanted by Berninger’s Phoebe Bridgers duet or his Mercury Rev cover, who could not wait to bask in this guy’s loopy dad melancholia again, with or without the brothers Dessner and Devendorf in tow.

Berninger has ventured outside the National’s confines before, most notably with EL VY, his duo with Brent Knopf of Menomena and Ramona Falls. That project’s sole album, 2015’s Return To The Moon, recast its narrator’s restless baritone in funky, electronically infused rock songs with unpredictable arrangements that often resembled cartoons coming to life around Berninger, Roger Rabbit style. The dissonance between his signature brooding grandeur and Knopf’s playful mad-scientist quirks was jarring at first, but with a little time to sink in, the combination started to make sense. EL VY was simply accentuating the humor and willful perversity that have always been part of Berninger’s writing. Perhaps for some listeners, lines like “I’ll be the one in the lobby in the collared ‘fuck me’ shirt/ The green one” even landed better with a less maudlin soundtrack.

For Serpentine Prison, out this Friday, he turned to a different foil: the legendary Memphis soul musician Booker T. Jones, best known as the driving force behind Booker T. & The M.G.’s. A decade ago Jones recruited Berninger to sing on a song from his 2011 album The Road From Memphis. So when Berninger began toying with the idea of a covers album, he felt emboldened to call up Jones, who produced Willie Nelson’s 1978 standards collection Stardust, a beloved staple of Berninger’s parents’ record collection. They ended up recording enough covers for a separate, forthcoming release, but it quickly became clear the National singer had enough material lying around to cut an album of originals too.

Unfortunately, you can tell he was cobbling together his scraps here. Serpentine Prison has such a strong sonic imprint that it decisively hangs together as an album, but its procession of drowsy ballads could otherwise be mistaken as a B-sides collection. The National’s albums benefit greatly from traversing a spectrum between languorous dark-night-of-the-soul dirges and soaring, charged-up rock anthems. The various modes accent each other and create a sense of momentum. Here, Berninger pretty much stays in the cut, offering listeners little in the way of dynamic changeups or easy entry points. It’s a different kind of album by design, a mood piece that beckons you deeper into Berninger’s headspace. As such, it will probably only be of interest to National zealots like myself.

Those who put in the time will likely find their greatest rewards from the gorgeously understated arrangements from Jones and a cast of NPR-friendly indie rockers including Andrew Bird, members of the Walkmen, Berninger’s EL VY partner Knopf, his old college bandmate Mike Brewer, various National contributors, Jones’ son Teddy, and more. Serpentine Prison casts Berninger in a series of rich organic soundscapes that lend a bluesy touch to his usual solemn reflections. Each track boasts its own subtle accents: the organ and piano interplay throughout “One More Second,” the harmonica that lends “Loved So Little” a smoky edge, the violin that mournfully floats through “Collar Of Your Shirt.” These flourishes reveal themselves with successive listens. Like flowers planted throughout the songs, they bloom slowly but surely, and you might not notice them if you don’t step back and take it all in.

A close listen will be less favorable to Berninger’s lyrics. The most resonant critique of latter-day National songs is that Berninger sometimes descends into a caricature of the persona he’s spent two decades developing. His words can play like a parody of the lovelorn, wine-drunk depressive heard on “Bloodbuzz Ohio” or skip past profound into the inscrutable beyond. It’s one of the tendencies National fans tend to excuse or even embrace, the same way you come to love even the more awkward and difficult aspects of your friends and family members. He returns to his usual fixations here, ruminating about romantic alienation and aging-hipster ennui on song after song, artfully but also to the point of solipsistic excess. There is something to be said for staying on-brand and sticking to an approach that has worked wonders in the past, but how many times can he write a line like, “Forget about what I said, I want you to meet you somewhere right now/ On a glass-bottom boat, I want you to take me out” before it starts to become old-hat?

Considering the tasteful prestige production he sought out from Jones and the strict adherence to autumnal vibes and slow tempos, I get the sense that Berninger hoped Serpentine Prison would be an entryway into elder-statesman gravitas, the kind of record towering figures like Bob Dylan and Leonard Cohen tended to make later in life. Serpentine Prison isn’t that, partially because Berninger is a different kind of artist, more accessible and self-effacing. Although his rumpled-poet confidence is higher than ever, as a lyricist he’s simply not on their level. For every stunner like opening line “My eyes are T-shirts, they’re so easy to read/ I wear ‘em for you, but they’re all about me,” there’s a groaner like “I’ve been picking my kids up from school/ Smelling like Girl Scout Cookies and drool,” a Berninger-ism that tests even my own fealty to the man. Certain lyricists blur the line between bullshit and inspiration to the point that their every stanza starts to feel like a sacred text. Berninger doesn’t have that kind of mystique. He’s too emo to pass off his airballs as strokes of genius.

His voice, though, remains an all-timer, and he knows full well how to use it. After hearing him perform live in recent years, I’m not sure he can still pull off the top-of-his-lungs holler heard on electrified National classics like “Mr. November” and “Graceless.” But he’s eminently capable of digging into his voice’s cracks and crevices, digging around for every bit of scratchy texture, as heard on “Oh Dearie.” He can still croon a weary melody with the best of them, as on the Gail Ann Dorsey duet “Silver Spring” or the horn-laden “Take Me Out Of Town,” the closest thing to a straight-up National song here (perhaps because it feels like a lesser retread of “Pink Rabbits”). His hook on the title track has been stuck in my head for weeks, and few vocalists could conjure the deep yearning he brings to the simple, powerful lament, “I feel like I’m as far as I can get from you.”

If Serpentine Prison emphasizes Berninger’s weaknesses, it also resoundingly reminds us of his strengths. Because I was obsessed with Radiohead long before I was obsessed with the National, I’m compelled to compare this album with Thom Yorke’s solo discography, which also nudged a frontman’s uncut essence into darker, less accessible corners. Those heavily invested in the dude’s main band will find a lot to like but will also come to value his bandmates all the more. Casual fans of the National may be bored by Berninger leaning into the band’s slow, downcast side without providing the usual catharsis to balance it out, and skeptics will surely dismiss the album as par for the course. I’m not about to harangue those people about giving Serpentine Prison a chance; I’d rather exhort them to revisit Trouble Will Find Me and see if they aren’t blown away. But if recent history is any indication, new layers of beauty may emerge over the years, and somewhere down the line I might end up evangelizing for Serpentine Prison too.

Serpentine Prison is out 10/16 on Book Records.